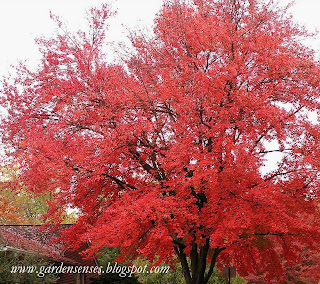 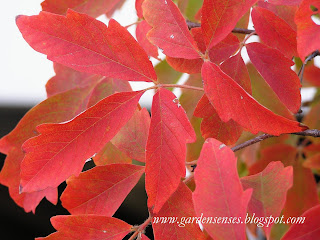 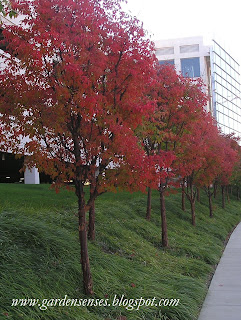 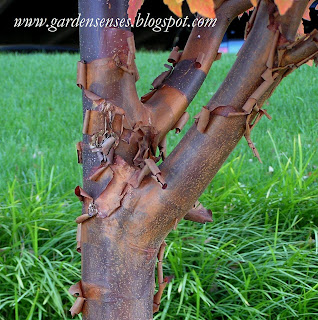 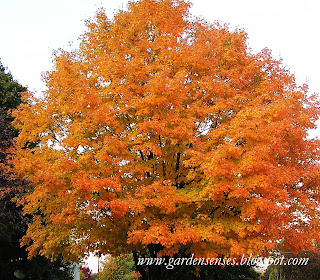 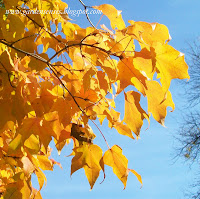 While red maples get all the attention,
the golden leaves of our old Black Maple were
like a bright ball of sunshine this fall. 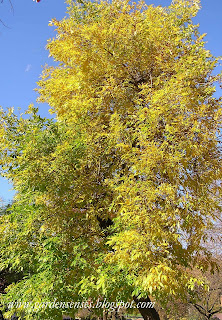 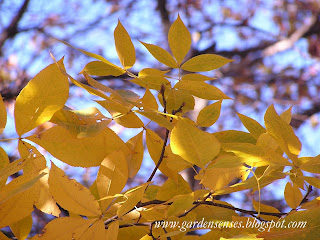 Ash (Fraxinus) have pretty yellow fall foliage.
The bad news is that the emerald Ash Borer is devastating the Ash population. 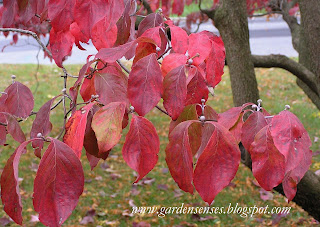 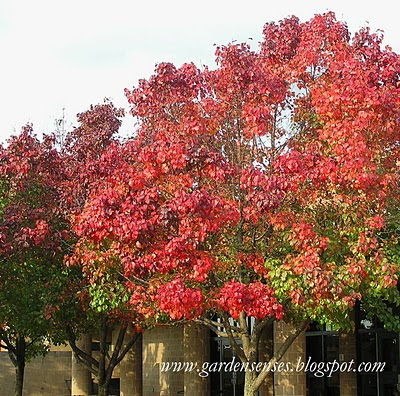 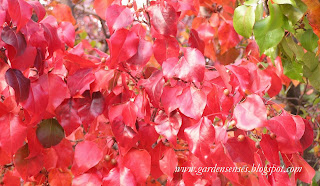 Bradford Pear has long been a favorite, but is susceptible to storm damage.
Chanticleer Callery Pear (Pyrus calleryana 'Chanticleer') is a stronger cultivar. 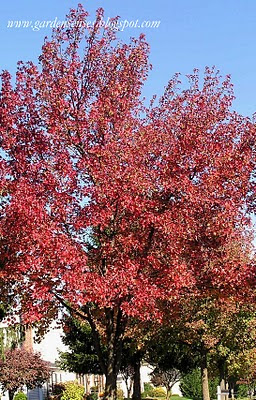 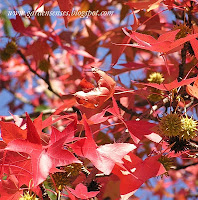 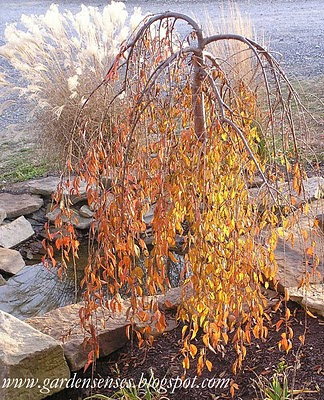 Even a weeping cherry gets in on the act. 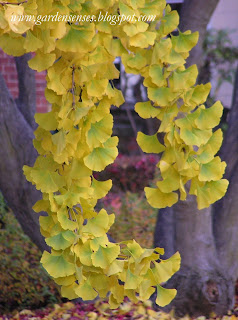 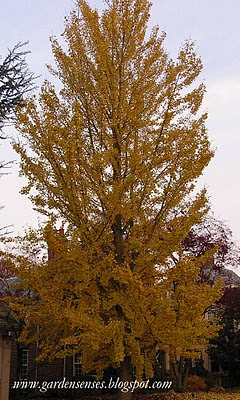 Maidenhair Tree (Ginko biloba) turns a
stunning yellow in the fall.
While its habit can be quite variable,
leaves outlining its branches lend a sculptural look.
Generally, only male cultivars are sold in the trade since the
fruit of female trees in undesirable. 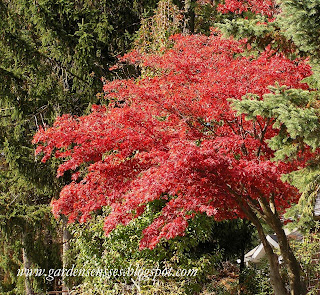 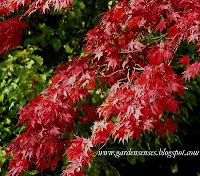 Last, but not least, the beloved Japanese Maple (Acer palmatum)
puts on its autumn show. 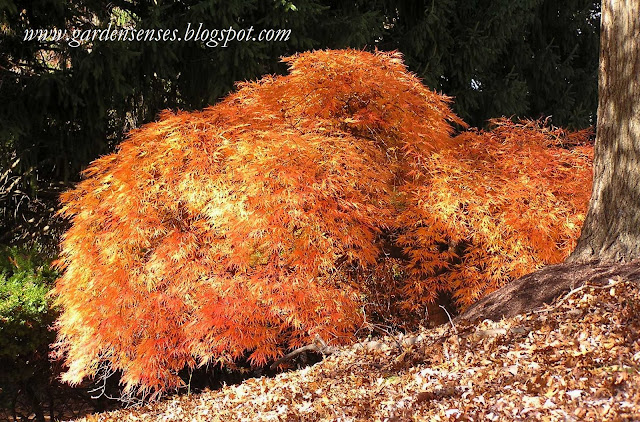 To see even more fall color, see
The Fall Color Project
at The Home Garden.

Gorgeous trees and fall color. Our color is almost all gone. What a display you have.

You really highlight a wide selection of trees--what a great post. Carolyn

Amazing! I hope my maple gets that color some day
Great post, really beautiful!

Wow, Chris! Now that is some fall color. That is exactly the reason I titled my foliage post subdued! I enjoyed your post. Have a great weekend.

Very nice! I'm a huge fan of ginkgos for their fall color and those Japanese maples you have are awesome! I'll add you into today's post ASAP!

gardenwalkgardentalk-
The show is fast disappearing here, too. But even as I drove around today, there are still some gorgeous trees.
Carolyn-
I'm glad you stopped by. Thanks for letting me know you were here!
fer-
Maples really are beautiful. We have a small Japanese Maple that needs to grow, too.
p3chandan-
Glad you enjoyed them! I appreciate your visit.
Whimsical Gardnener-
Perhaps it's because I'm taking photos for the blog, but the colors seem more vivid than ever in central Pennsylvania this year.
Dave-
Thanks so much for including me in spite of my last minute posting! The Japanese Maples aren't mine - they're great examples, are they not?

Stunning maples! I enjoyed the burst of fiery fall colour, it is all pretty much over in my garden now.

I don't know how people can live in the areas without these autumn colors. Beautiful!

Hi Chris,
Beautiful images. I have yet to visit a temperate country in autumn...it is No. 1 in my wish list now!
Rosie

Your photos are stunning, Chris! So vibrant! I have seen a few red maples this fall that have taken my breath away. They almost don't look real...they are so brilliant.

Dear Chris, What a cornucopia of autumnal delight you present your readers with here. Your photographs are beautiful and really capture the brilliance of the leaf colour that these trees give. Surely, a tree for every situation here so no-one need miss out!!

And, thank you so much for making my weblog a 'Favourite'. I am thrilled and so pleased that we have found each other in the labyrinth of Blotanical. I look forward to our continuing dialogue in future postings.

Plantaliscious- I'm glad you enjoyed the colors! They are fast disappearing here, too - I'm glad I got them in photos.

Tatyana- I'm thankful for the colors of fall, too.

Rosie- I hope you visit to see our fall colors sometime!

Jan- I thought the Maples were more billiant than ever this year.

The fall color on these trees truly is brilliant! Our flowering dogwoods and maples have been amazing this year. The Bradford pear is just beginning to turn. 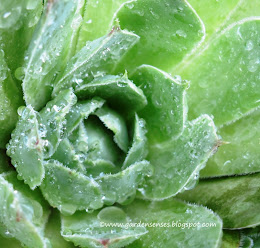 Chris
South Central Pennsylvania
I'm often out and about looking for examples of good garden design, plant picks and ideas for plant combinations to share as a landscape design resource. 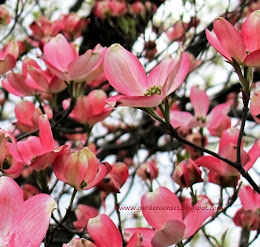 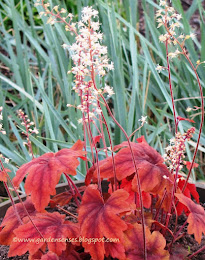 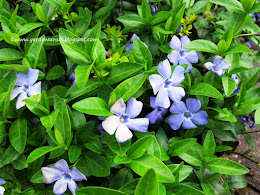 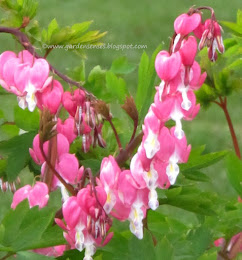